A recent study identified several specific conditions during pregnancy that appear to increase a baby’s chances of suffering hypoxic-ischemic encephalopathy (HIE) which is a very serious type of childbirth brain injury. This research helps advance our understanding of HIE’s causes, which will allow improvements in prevention and treatment. This is what we have to work towards — getting the science and the medicine better so we have less oxygen-deprived children during the birthing process.

What is hypoxic-ischemic encephalopathy?

Hypoxic-ischemic encephalopathy (HIE), is a brain injury resulting from a lack of oxygen and blood flow to the baby’s brain. It can lead to seizures, difficulty feeding, low muscle tone, organ dysfunction, and breathing difficulties. HIE may cause long-term neurologic disabilities such as cerebral palsy, intraventricular hemorrhages, and learning disabilities.

What risk factors did the new study link to HIE?

There are many additional pregnancy conditions or issues that are associated with HIE. All of them involve disruption of the delivery of oxygen to the fetus.

They include, but not are limited to: 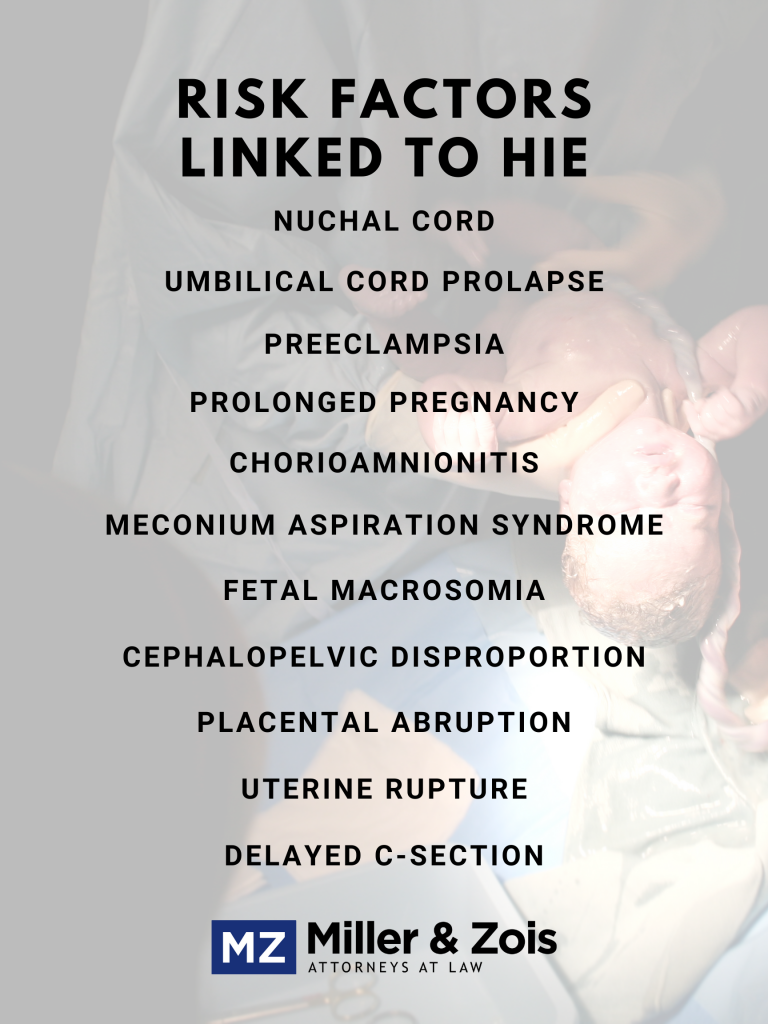 A baby girl suffered hypoxic-ischemic encephalopathy during her delivery. As a result, she suffered permanent brain damage. The girl, now four years old, was cognitively impaired, motor functionally impaired, non-verbal, and not potty trained. Her family alleged that the hospital staff’s negligence caused her permanent injuries. They claimed the hospital failed to detect fetal distress and wrongly tracked the mother’s heart rate with the fetal heart monitor. The family argued that had fetal distress been timely detected, the hospital staff could have prevented brain damage by ordering an emergency C-section. A jury awarded a $23,900,000 verdict.

A baby boy was born with hypoxic-ischemic encephalopathy, causing significant brain damage. He developed cerebral palsy, hearing loss, vision loss, and dystonia. Because of his condition, he required lifelong in-home care. His family claimed the hospital staff failed to timely admit his mother, improperly assessed her preeclampsia, failed to timely treat a placental abruption, and failed to timely order a C-section. This case settled for $3,500,000.

A baby boy was born with hypoxic-ischemic encephalopathy. His family alleged that the hospital staff’s negligent care caused his permanent injuries. This case settled for $1,000,000.

A baby boy developed hypoxic-ischemic encephalopathy at birth. As a result, he sustained cerebral palsy, cortical blindness, nystagmus, esotropia, and quadriplegia. His mother alleged that the traveling nurse’s negligence caused his permanent injuries. She claimed she failed to monitor the fetal heart rate, failed to detect fetal distress, prolonged the second stage of labor, and failed to order an emergency C-section. The woman also alleged that the nurse deleted her medical records that determined how her son suffocated at birth. The nurse and hospital denied liability, arguing that they provided reasonable care. A jury ruled in the woman’s favor and awarded $30,550,000.

HIE and other birth injuries involving oxygen deprivation are frequently related to negligent medical care during labor and delivery. Contact the birth injury lawyers at Miller & Zois to find out if you have a malpractice case for your child’s brain injury. Call us at 800-553-8082 or contact us online.