The U.S. has long had the highest rate of maternal fatalities during childbirth of any country in the developed world. STOP.  Read that again.  We are inundated with so many statistics these days that we lose sight of the ones that matter.  This one matters. This is insane. The rate of maternal injuries and deaths during childbirth in U.S. hospitals has been steadily increasing over the decade. For their part, hospitals have insisted that this increase was largely out of their control and not a reflection of any declining quality of care. Hospital advocates suggest that poverty rates and an increase in pre-existing maternal health conditions are to blame for these morbidity rates.

This attempt to shift blame away from doctors, nurses, and hospitals fails.  USA Today recently did an investigation of just this.  You don’t think USA Today is the New England Journal of Medicine?  Fair enough.  But this is not rocket science.  It is just a look at the numbers and, yes, the anecdotal stories. USA Today showed that demographics alone cannot explain maternal death rates in the U.S. The investigation looked at medical records and lawsuits from across the country, suggesting that delayed care, misdiagnosis, and poor safety measures contributed to maternal death and injury rates.

In their investigation, USA Today reported on the story of a New Orleans woman named Felicia West who died a week after giving birth to her son in 2012. According to her sister and roommate, Felicia’s pregnancy was initially healthy and normal. Hospital records also confirmed that Felicia had no prior history of high blood pressure or other major health conditions. However, she suffered from obesity as she weighed as much as 200 pounds during her pregnancy, despite being only five feet tall. Everything changed after Felicia slipped and fell in her bathroom, striking her pregnant belly on the bathtub. She was already six months pregnant. West headed to Touro Infirmary in New Orleans to get everything checked out after the fall. Felicia experienced her first-ever seizure shortly after arriving at Touro around October 2012.  Then she went into respiratory arrest so doctors delivered her baby via emergency C-section, out of concerns that her placenta had become detached. Felicia developed more symptoms at Touro. She complained of significant headaches. Her blood tests also showed abnormal results, and she experienced kidney problems. These symptoms resulted in the treating doctor misdiagnosing her with a rare blood disorder. Health care providers also did not properly treat Felicia for her conditions. A state medical review panel cited these two issues as being the only care failure. West remained hospitalized for a week after giving birth to her son, during which she continued to receive treatment for a rare blood disorder she never had. According to medical records, her blood pressure levels were extremely high. Her levels were 117/67, 171/90, and 174/103. One year before, the American College of Obstetricians and Gynecologists (ACOG) warned that blood pressure over 160 is a significant indicator of an upcoming stroke. They also warned that new mothers with blood pressure levels that high may die if they are not immediately treated. Doctors and staff at Touro failed to listen to ACOG’s warning by not properly treating Felicia’s high blood pressure. Her complications would eventually result in a stroke. In the three hours leading up to it, health care providers failed to respond appropriately to any potential warning signs. Instead, they gave an icepack and painkillers. Providers were in no rush to assist Felicia and she waited for a long time after her stroke before receiving any medical attention. The hospital staff paged a doctor to deal with her. However, the doctor did not act urgently on this matter. Nursing notes show that the doctor said around 6:45 p.m. that it would take a while before she could see her. By that morning, West was already dead.  Just an awful tragedy.

The rate of childbirth-related complications has gone up significantly in recent years. Around 700 women die and 50,000 sustain severe injuries during labor in delivery each year. USA Today reported that at least half of these deaths and injuries are preventable and the result of negligent medical care. Facilities such as Touro become very defensive over potential causes of childbirth-related complications. Touro released a statement to USA Today stating that they serve a patient population that is medically vulnerable. They also argued that the news agency’s hospital data was “unsound.” Touro otherwise refused to answer questions related to this issue. They argued that lifestyle diseases, high healthcare costs, delaying medical treatment, high poverty rates, and high morbidity rates are the actual cause of the statistical trends cited by USA Today. Childbirth safety advocates view this response as troubling. A majority of the women giving birth at Touro are black. Black mothers are three to four times more likely to die from childbirth than their white counterparts. They are also twice as likely to experience severe complications or childbirth injuries. A senior vice president at an organization that works on issues concerning maternal justice notes that typical hospital responses appear to have anti-black and anti-women undercurrents.

Back to the USA Today’s Investigation 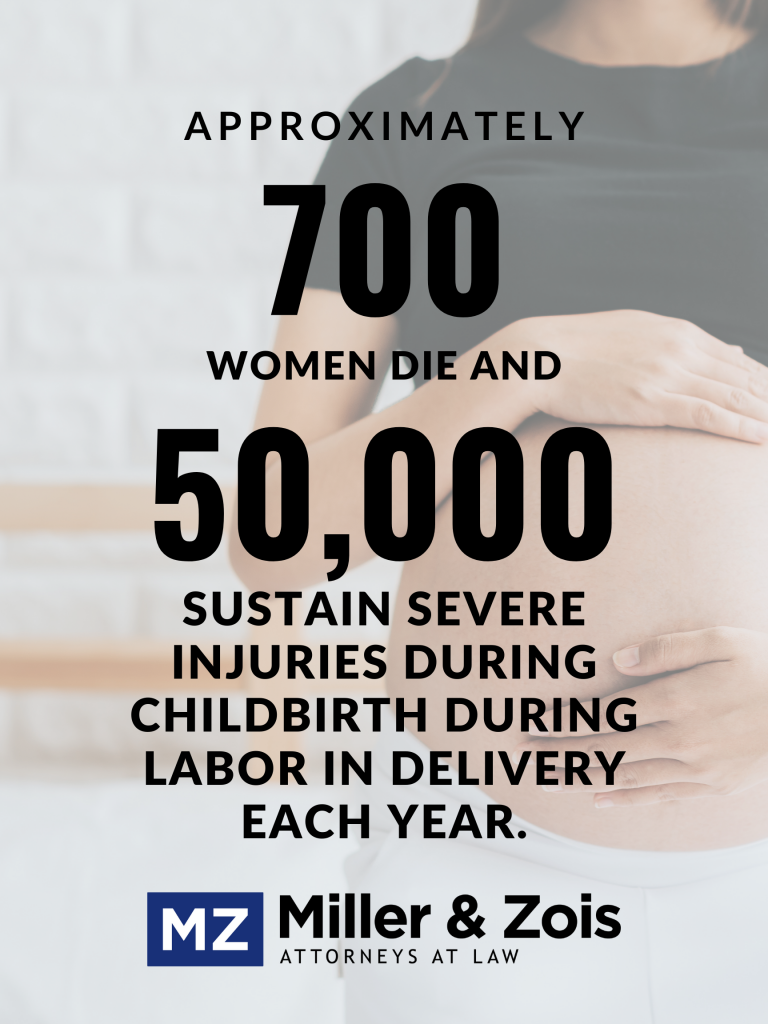 USA Today compiled data on deliveries and the associated maternal health. Most of the information on hospital care and trends came directly from patient’s billing records, which hospitals are required to report to state regulators. Morbidity rates for individual hospitals are usually not released to the public. This data gathered by USA Today came from 13 states and comprised about 7 million births. By sifting through these records, investigators could track maternal childbirth complications. They found injuries and complications occurring at over 1,000 hospitals by using a CDC-developed formula for examining cases involving women harmed from childbirth. Based on their investigation, USA Today found that about one in eight hospitals experienced serious childbirth-related complications at a rate that was twice as much as the average of 1.5 percent. These “high-risk” hospitals were found all over the country. The demographics of these high-risk hospitals turned out to be very mixed, serving patients from different racial and economic backgrounds. USA Today suggests that these results show that income and race only have a limited role in explaining why some hospitals may have higher complication rates than others. They note that poorer women have less prenatal care access and that black women are more likely to develop pregnancy-complicating conditions such as hypertension and blood disorders. Several of the high-risk hospitals also specialize in serving women who experience these complications more often. Many of these hospitals were community hospitals that can be found in urban, suburban, and rural settings. At the 120 high-risk hospitals examined, income and race did not affect the likelihood that a mother would develop complications from childbirth. White mothers at these hospitals were three times more likely to have fatal complications than at other hospitals. Mothers who had health insurance also experienced higher complication rates than they would have at others. According to safety advocates, the lack of public access to data has made it easier for hospitals to deflect blame onto patients and to make excuses for their poor results.  While considered a valid point, it diverts attention away from improving overall hospital care.

Touro vs. Other New Orleans-Area Hospitals

Life-threatening complications resulting from childbirth occur more often at Touro than at most hospitals in the United States. USA Today discovered that Touro and 119 other hospitals have high rates of mothers suffering from severe complications. They discovered this after examining bills that looked at 7 million births in 13 states. The chances of women having blood transfusions, hysterectomies, seizures, heart attacks, and strokes were twice as likely as these 120 hospitals than in others. At 2.8 percent, Touro Infirmary has the highest complication rate of any New Orleans-area hospital. It also has the most births of any hospital in the city. This is alarming because it means that significant amount of mothers are choosing to give birth at statistically inferior facilities. Only three other hospitals in the city, out of a total of ten, had rates higher than the national average. Poor mothers at Touro had more complications than poor mothers at other hospitals. Black mothers also experienced more complications at Touro than at other hospitals. Mothers from the same zip code were more likely to experience more complications than Touro. The take-home message is that who delivers your child matters.  You pick an OB/GYN and hospital to protect against the downside.

A 36-year-old woman died after delivering her twins via C-section. Her husband alleged that the hospital staff’s negligence caused her death. He claimed they failed to recognize her uterine atony-induced bleeding, failed to control it with a Bakri balloon, and failed to timely order a blood transfusion. The hospital staff denied liability, arguing that they met the standard of care. A jury awarded her husband $10,850,686.

2019 – Illinois
A woman died after giving birth the previous day. Her cause of death was postpartum hemorrhage. Her surviving family alleged that the hospital staff’s negligence caused her death. They claimed the hospital staff failed to diagnose and treat her postpartum hemorrhage, failed to timely transfuse blood, negligently administered Factor VII doses, and failed to provide a massive postoperative blood transfusion. This case settled for $7,000,000.

A 34-year-old woman was admitted for the induction of labor. During labor, she experienced breathing difficulties, low oxygen levels, and low blood pressure. She also vomited and sustained an increased heart rate. Despite this, the hospital staff failed to treat her symptoms. During the delivery, the woman lost significant blood. The hospital staff also failed to treat this. Post-delivery, the woman suffered from vaginal blood clots, vomiting, and an irregular heart rate. The hospital staff subsequently performed an EKG, which revealed a heart attack. The woman then suffered cardiac arrest, resulting in her death. Her family alleged that the hospital failed to appreciate her preeclampsia, negligently administered Pitocin, and failed to timely diagnose and treat her overall condition. This case settled for $12,000,000.

2019 – California
A woman died from septic shock five days after giving birth. Her family alleged that the hospital staff’s negligence caused her death. They claimed they failed to timely diagnose and treat her necrotizing fasciitis and multi-organ failure. The hospital denied liability, arguing contributory negligence and assumption of risk. This case settled for $950,000.
$950,000 – Settlement