Our lawyers see a lot of pressure sore ulcer cases.  These bedsores come in many shapes, locations and sizes based in part on their etiology.

There are a number of dressings and treatment options available. DuoDERM, a hydrocolloid, is an occlusive gel dressing that helps maintain a moist wound bed. The idea is to reduce the amount of skin breakdown that is inevitable as a result of friction that comes with life such as putting on clothes, brushing up against bedsheets, etc.

The hydrocolloid in DuoDERM helps provide absorbency and a “moist gel-like environment” that helps promote moisture to rehydrate, soften, and liquefy the tissue. On contact with the wound drainage, the hydrocolloid matrix forms a cohesive gel that supports moist wound healing.

Exudate, a thick fluid or drainage that leaks from the capillaries into the wound, is part of the normal inflammatory process. However, when the wounds healing process has been delayed or produces excessive drainage, it can be detrimental to the healing process.

The goal with any wound dressing is to remove excess fluid to maintain a healthy yet moist wound. This allows for the exchange of gasses, the ability to insulate the wound and protect the wound from outside contaminants that can be infectious. When changing the dressing, you want to have as little trauma involved as possible. The goal treating a bedsore wound is to maintain a clean and covered area. 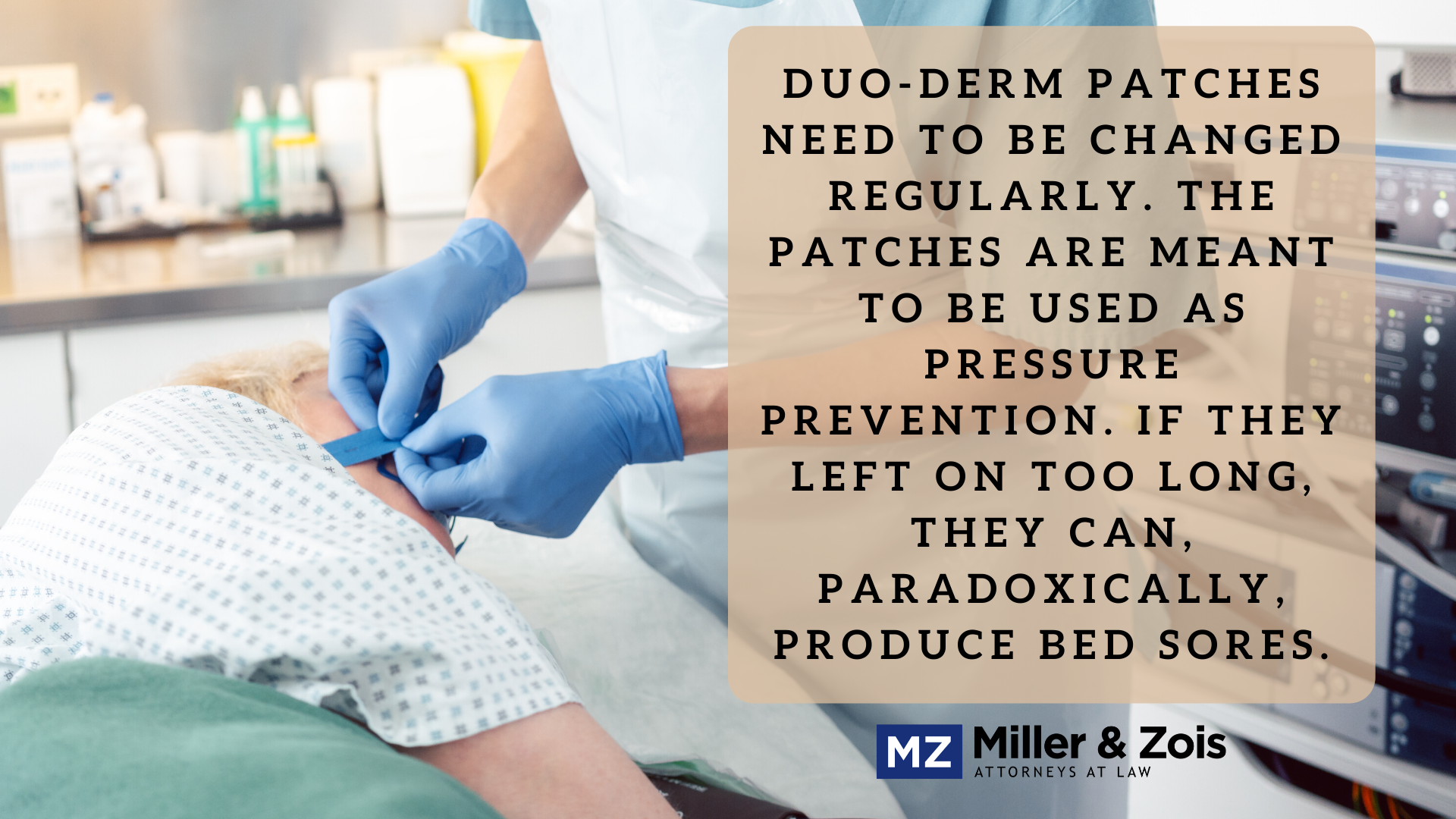 Hydrocolloid dressings such as DuoDERM work best with a wound that has a mild to moderate amount of drainage. DuoDERM dressings are impermeable to water oxygen and bacteria. DuoDERM dressings are popular because they rarely stick to the wound itself and can be removed without tearing the tissue underneath. Unlike other dressings, it can be placed on wet wounds and wet surrounding skin and will remain in place.

DuoDERM patches need to be changed regularly. The patches are meant to be used as pressure prevention. If they left on too long, they can, paradoxically, produce bed sores.

Why Is DuoDERM Used to Treat Bedsores?

DuoDERM is used to treat bedsores because it has the ability to not stick to the wound and be taken off without injuring the skin. A DuoDERM dressing can be used on all types of bedsores. Because a DuoDERM patch can create a moisture barrier, it is important to always make sure that the bedsores are not infected. Otherwise, a DuoDERM dressing could exaggerate the problem. As long as the infection is not present, a DuoDERM patch will normally cause a wound to begin smelling strongly after a couple of days without any cause for concern.

What Are the Side Effects of DuoDERM?

The mistake nursing homes make with a DuoDERM patch is they don’t bother to change it frequently. This can exacerbate a bedsore wound. You also need, as you will see below, to make sure the patient is not allergic to DuoDerm.

What Are Example Stories of Use of DuoDERM in Nursing Home Lawsuits?

These are not cases where DuoDerm caused a pressure sore. We don’t see nursing home lawsuits that center around DuoDerm. But these lawsuits tell stories that are sometimes instructive to understand that the failure to treat a bedsore, which can include not using a dressing like DuoDerm, can lead to gave injuries and death.