Our lawyers bring medical malpractice claims against not only doctors but nurses and medical assistants.  There is a lot of confusion between the two, some of which have legal implications.  This post clears up some of this confusion.

What Is the Difference Between a Registered Nurse and a Medical Assistant?

Nurses and Medical Assistants Have Different Training and Education Requirements

There are different types of nurses and the educational requirements, training, and licensing standards are different for each type.

There are no universal educational or training requirements for medical assistants. Rather, qualifications for medical assistants are determined by individual employers. Some hospitals or healthcare employers may require MAs to have a certificate from an accredited MA training program. These training programs can be anywhere from 9 months to 2 years. The educational focus for MA program differs from nursing in that it focuses more on administrative functions as opposed to medical.

Use of Nurses Versus Medical Assistants in Patient Care 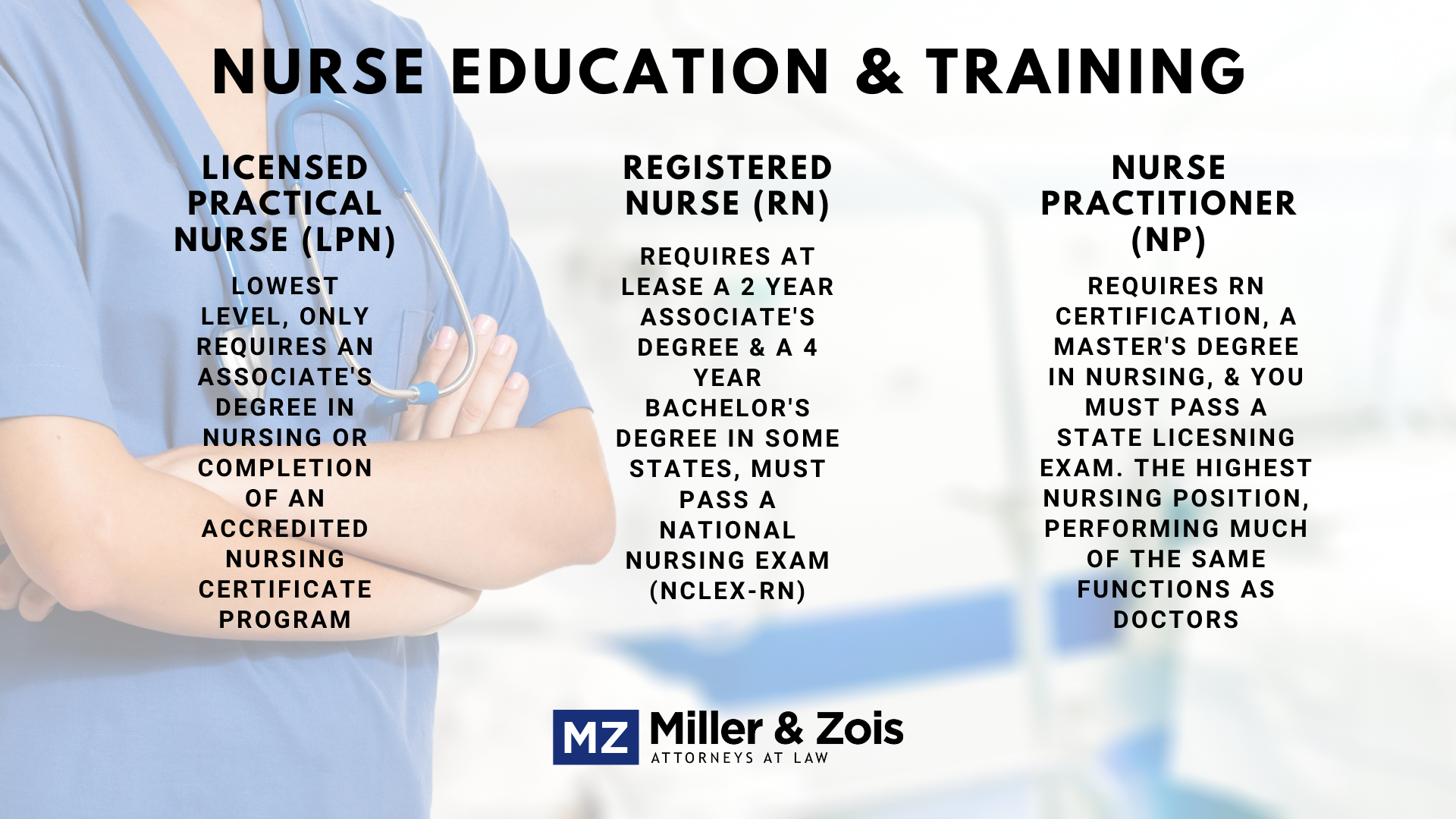 In addition to the basic patient care described above, medical assistants often perform administrative duties such as answering phones, scheduling, and filing. No matter what job duties they are performing, however, medical assistants are always required to operate under the direct supervision of a licensed doctor or nurse. Registered nurses have their own licenses and do not require direct supervision. This enables RNs to perform a much wider range of duties compared to medical assistants. Nurses can perform medical procedures such as starting an intravenous line or administering more advanced or invasive forms of treatment like chemotherapy. Nurses who specialize in certain fields such as oncology or obstetrics usually perform high-level procedures as a part of their basic job duties.

A woman underwent an iron solution injection that was administered by a medical assistant. She was supposed to receive a vitamin B-12 instead. The woman was left patient with discolorations and chronic arm pain. She alleged that the overseeing physician’s negligent supervision contributed to her injuries. The physician admitted negligence but disputed the injuries. A jury awarded the woman $120,000.

An unsupervised medical assistant administered a Tetanus shot to a woman. The woman suffered joint effusion, supraspinatus tendinopathy, a subchondral bone cyst to her shoulder, and arm muscle tears. Her left upper extremity was now permanently impaired. The woman alleged that the medical assistant’s negligence caused these injuries. She also claimed negligent supervision against the urgent care. The jury awarded her a $62,500 verdict.

A woman underwent Pap and HPV tests during an OB/GYN visit. The results were abnormal. However, the medical assistant never notified the woman of her results. For several months, the woman experienced lower abdominal cramps and irregular bleeding. The OB/GYN told her that the fibroids and the steroids she was taking caused these issues. A non-party physician diagnosed her with cervical cancer several months later. The woman died shortly after. Her surviving relatives alleged that the medical assistant’s failure to tell her of her test results delayed her cancer diagnosis and treatments. They also claimed the OB/GYN failed to rule out cervical cancer despite her symptoms. This case settled for $700,000.

A man underwent a routine physical. The medical assistant drew blood, collecting several vials. She then removed the needle and went to get a bandage. The man became unconscious, fell, and hit his face on the floor. The man suffered a neck injury that left him a quadriplegic. He and his wife alleged that the medical assistant’s negligence caused this. The defense denied liability. They argued that an accident caused the man’s injuries. A jury awarded a $15,490,908 verdict.

A medical assistant administered a Depo-Provera injection to a 38-year-old woman. They failed to sterilize her arm before the injection. The woman suffered a staph infection. She underwent left shoulder surgery. The woman alleged that the medical assistant’s negligence caused her injury. She also made a vicarious liability claim against the overseeing physician. The defense denied liability. They argued that they provided the appropriate standard of care. A jury ruled in the woman’s favor and awarded her a $180,000 verdict.